skip to main | skip to sidebar

Anyway,  I have been kicking around a lot of different rulesets lately, trying to find something I like.  I have to say that Osprey's releases into wargaming have really scratched a lot of itches, especially in 6mm.  Horizon Wars is a light, highly abstracted, game intended for 10mm figures or smaller.  This is great for me because I just don't have a lot of time for gaming anymore so, as much as I'd like to get bogged down into the minutiae of firing different guns from each vehicle it just isn't really feasible at the moment.  That and my youngest has picked up on it right away.  Most importantly, it's giving me a reason to finally paint my 6mm figure stuff (after I clear a few other things out of my way).

This game was a mirrored force engagement just to remind us how the game works.  As I mentioned I've been reading a lot of other rules so they're starting to get jumbled in my head.  Both sides had a Lt Infantry CHQ, 3x Lt Infantry, 2x Mobile Infantry, 1x Recon, and 1x Lt Artillery.  I was using Dark Realm Miniatures Pax Arcadia figures for my Valiant Humans and Alexander used a mix of my DRM Andrayada, Khurasan Mechanoids, and a CAV Specter for the Robot Menace.  I realized I didn't have any appropriate models for either side's light artillery so subbed the Pax Arcadia Thunderstrike artillery piece and the CAV Specter for the Robot Menace.  Same for the robot's mobile infantry, so I tossed a couple of my 15mm Mechanoids on the table to represent those.  I see some purchases in my future...

Alexander set up the terrain, and he deployed first

The first turn was mostly just me double checking movement rules, the usual rush forward, some shots at long odds, and my use of the CHQ's ability to pass an action to another unit. 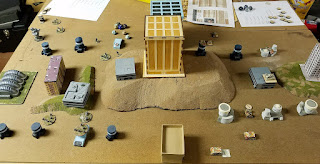 The second turn saw Alexander's Recon element removed after my Mb Inf charged them.  My Lt Inf took up positions in buildings.  Alexander ran his Mb Inf in between the two towers in the center of the table.  Some light damage passed around, but nothing major beyond the removal of the Recon element. 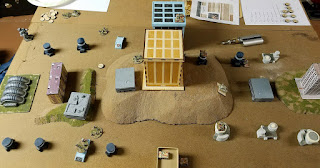 Casualties began to mount in the third turn.  I lost two stands of Lt. Infantry after some critical hits on Alexander's part.  He lost both of his Mb Infantry, one to a critical hit, and the other after a prolonged bout of withering fire.  By the end of this turn he had his CHQ, a stand of Lt Inf, and his Lt. Arty.  I wasn't fairing much better, having lost a stand of Mb Inf to an assault that I initiated and another to continued fire from the arty.  I had my CHQ, one stand of Lt Inf, Recon, and Lt. Arty. 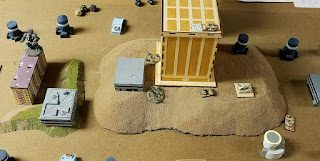 The fourth turn ended with Alexander having lost his CHQ and remaining stand of Lt. Inf, leaving him only his Lt. Arty.  I lost my recon, and advanced my infantry to engage, the Lt Arty having suffered some major damage. 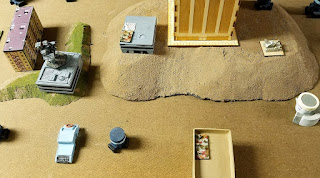 At the beginning of the third round we instituted a rule that at the beginning of the turn if a D12 rolled higher than the total number of models left on the table then the game ends (it was getting late).  There was a fifth turn, but nothing really changed. The roll ended the game before a sixth turn could be played and we tallied the Priority of the remaining units, he had two, I had four, giving me a rather Pyrrhic victory.
Posted by Sergeant Crunch at 11:24

Terrific! Playing with your kids is how this game started. Great to see the torch passed on.

Yeah, if you're brave enough to go through my previous battle reports you'll see my kids are my most frequent opponents. When I was in the military it wasn't always easy to find other players and I have been on something of a hiatus for quite some time. Trying to get back into it now.

Attempting replica rolex to tap into that heritage, the new Argonaut’s dial is also all business, sporting a highly legible fake watches design with Super-LumiNova-coated Arabic markings at 12, 6, and 9 o’clock, and simple, also-lumed baton rolex replica indices for the remaining hour markers. Minute tracking is handled care of simple white hash lines, and Rolex replica dial text is pleasantly minimal with only Bremont’s signature at 12 o’clock, “HMAF” in very subtle gray text fake rolex uk which is barely visible against the matte black dial, and “Chronometer” and “300m – 980ft” in painstakingly small text at 6 o’clock. (Boomers will fake watches uk need their readers.) Bremont’s Argonaut handset is also pleasantly restrained with simple stick hands, the fake Rolex hour hand in black and minute hand in orange for visibility-at-depth reasons, each well-coated with Super-LumiNova. A traditional date window sits at 3 o’clock, fake Breitling rimmed in white, and home to a white-on-black date wheel, a personal favorite of mine on any black-dialed fake Omega watch.

I'm so glad and enjoyed your Post. Thanks for inspiring on this. It is very informative on subject or topic. and Thanks For Sharing this post. I have something to share here.
McAfee.com/activate,
www.mcafee.com/activate

I'm so glad and enjoyed your Post. Thanks for inspiring on this. It is very informative on subject or topic. and Thanks For Sharing this post. I have something to share here.
mcafee.com/activate |
www.mcafee.com/activate

Suscribe to my ramblings!

Sergeant Crunch
Another miniature wargamer who has decided that his rants, minis, works in progress, and battle reports are sooooo important that they need to be shared with the world via the WWW.