skip to main | skip to sidebar

No, it's not a cloth that's dropped from orbit into a combat zone.  :)  What I'm referring to is a cloth to paint on while protecting the surface underneath, very important if you're a coffee table or dining room table painter.  Way back when [queue flashback]


I first started miniature wargaming as a hobby I picked up a drop cloth at the local Michael's in Augusta, GA (where I was stationed at the time) while purchasing my first paints and supplies for my Space Marines and Dark Eldar. (craptacular paint jobs found here) I forget how much I paid for it, but it came two to the package and was cloth on one side and plastic on the other. Little did I realize just how useful that was.  I could use it to dry my brushes, removing excess paint for dry brushing, and even spill full cups of water/coffee/etc without it leaking through. Highly important as I didn't have a hobby space yet and was painting on the dinner table or coffee table. You can see a picture of it here after having used it for a couple years.

As you can see, even after just a couple years it was well used.  By the time we moved to Kansas it has pretty much met it's life expectancy and could barely fold because there was so much built up paint.  Not to mention the few times it had been attacked by kids with scissors.  I attempted to find a similar drop cloth, but to no avail. :(

I had pretty much consigned myself to not finding a suitable replacement as I have a dedicated painting table now and protecting it wasn't much of a concern.  Though it was nice to have a surface I could dab the extra paint off of a brush.  Now my kids are painting miniatures and sharing the little 2'x4' table (same one in the picture above) isn't going to cut it with four people trying to paint (when one wants to paint or they see me painting they all want to paint).  So, it's back to the dinner table for painting time.  It's a nice table, 53" square, so plenty of space but I don't want marks from the inevitable accidents. 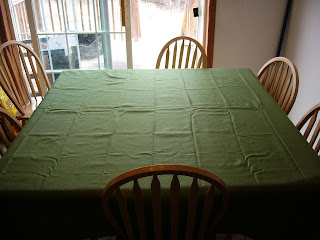 So I started looking into finding a replacement drop cloth.  I went to the local Hobby Lobby and they didn't have anything to serve as a drop cloth (though I did pick up a couple small cardboard boxes to use as 15mm buildings...more on that later), let alone a plastic backed drop cloth.  Undeterred, I thought to myself, "Self, they sell drop cloths at hardware stores.  Why not check there."  So we did, and they wanted $19.99 for an 8'x12' double-sided drop cloth not too dissimilar to the one I previously had.  Feeling that was more than what I wanted to pay we went to Wal-Mart, figuring they might have drop cloths. They did.  This one for just under $7. 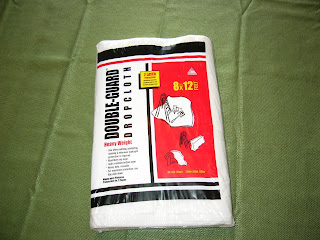 Obviously, 8'x12' is bit excessive for a 53" square table.  So I rolled it out and cut off 56" worth of material.  However, when I went to cut that to fit the table, I had a slight surprise...a standing seam in the middle of the cloth.  So rather than trying to cut along the seam or pull the seam apart I just left it folding so that I have two layers of plastic between the tabletop and so I can just flip it over when one side gets so covered it's not useful. 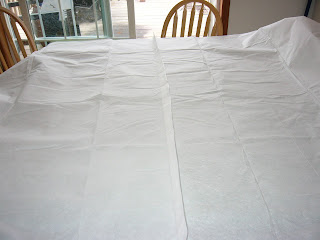 Here's a shot of a corner turned up to show the plastic backing. 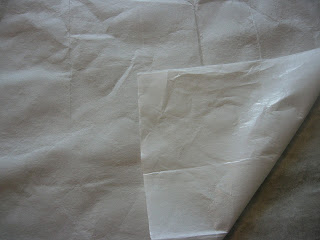 A couple notes on this drop cloth, the absorbent side is more like a rough paper towel rather than the cloth which is ok though I would've preferred cloth.  I haven't check the absorbency on it yet, though I'm sure that will happen sooner or later.  It's a little itchy to rest your arm on, but not enough to prevent you from doing so.  I'll probably end up cutting off a piece to use on my 2'x4' painting table in the game room, but that would require cleaning it.

Posted by Sergeant Crunch at 17:32

Suscribe to my ramblings!

Sergeant Crunch
Another miniature wargamer who has decided that his rants, minis, works in progress, and battle reports are sooooo important that they need to be shared with the world via the WWW.